The world is not round, man, not at all. It goes on, from mountains to canyons, undulating like a frequency—the rhythm of grand living. You can feel it. Smell it. A lesson learned where the white pines stand back to make way for grass uncivil and flowers with colors but no names.

You’ve seen it. That road. That magic ribbon leasing the world back to you. When was the last time you took off?

When was the last time you hit the road with a good shirt and hard thinking, both of which offer you all that you need to move under stars, near and far? Go on, it’s time. Lessons to learn. You see, it ain’t until you are out there, way out where civilization is but the hot flat on which wheels turn, you’ll find what you’ve lost; the ancient lessons hidden away in the calcium of your bones and the slick pink beneath your tongue. It’s in front of you, man, always in front of you. Teaching.
You were made well, friend, but ain’t whole. Your momma and daddy called you down from the stars, ready or not, and you hit that dome scattering pieces of yourself everywhere. You were made well, but ain’t whole. I know you feel that calling. Every now and then. A knock against the back of your calves. A whistle between the trees. A shift in the clouds. Something faraway calls to you. Its those pieces you lost; the pieces of your whole spread across the world. The road will lead you to them. The road can make you whole. Go on. There is a piece of you in Stratford at the end of the River Avon. It shines in the grass beyond Shakespeare’s tomb. Go on and see.
Kinkaju-ji has in it’s temple elements of your spirit. You must tread the gardens feet bare to find it. I saw you once myself, aglow, in Zona Colonial. Night burned so hot the butter moon sagged. The stars shined dull yellow and light from the streetlamps swam in the waves of it all. But you were there, the brightest thing on the island. I saw you again in the Batu Caves. Folks walked around tasting rainforest in their mouths. That piece of you was tucked away in a shop behind an arrangement of wooden buddhas. Parts of you can be found in many places, see, because you ain’t whole.

Get on that road. Find yourself. Find the fragments of your quality shimmering throughout world.

There is a piece of you on Bourbon street, Michigan Avenue, Champs-Élysées, Haight, Main Street, 6th street, Henley Street, La Rambla, The Bowery, 61, and Dolorosa. Ain’t no edges on the earth. And won’t be long before those pieces stop shining, settle into something hard. Go on. Let it draw you out and bring you together. Get on the road.

The road will make you whole. But the road will isolate you. You will collect those pieces. And as you draw together, so you move away. From old friends and old lives, from the anchors and the stiffs, from who you were to who you will become. You’ll abscond like the sea and those close to you will feel a slight. They’ll say you’ve changed. They’ll hold you back and say you’ve forgotten where you started. They’ll say you are no longer one of them. And it will all be true. Such is the road. To be whole is to change. To be whole is to grow out from your origins. To be whole is go where no one else can tread. Shed along the roadsides are etiquettes and the courtesies that bind other folks. Good folks, some, but shackled; civil.Civility, as you’ll come to know it, is a jive fooling partial souls into seeming complete. They hunker down around their ceremonies. Believe that staying fixed will keep them steady. And, the more of them fixed together, they believe, the steadier they are. They’ve accepted persisting as a way of being. Their matters are settled. In that way, you are not one of them. And that’s okay. You’ve two feet. Don’t stand amazed. Get out there. No fear. No shackles. Where there ain’t nothing but you. See, solitude is the tonic of the road. It is peace misunderstood; mistaken by civil folks as a critique of their company rather than a love of self. Even in a group of like minds, traversing the world together, your mind floats in it’s own space, as will theirs; hulls in the sea. You laugh, you drink, you adventure, you live, together, but you spend time in your own quiet; that place where language builds a tomb for muses. Let the road separate you, teach you to be present and to be alone. Reserve no worries for those who gripe at your isolation. Draw away. For they do not have a context for evolution. It’s foreign to them, as a bit of yellow in a blue. Go on, get on that road.

And once you’ve gotten out there, collected your parts and felt the power of isolation, the road will reveal it’s irony—it’s great magic. You won’t see it coming, man, you won’t. And you won’t know how you missed it. But the road will be there, laughing, the moment the irony settles on you.

You will have just arrived in Versailles. Only a plane sleep removed, Africa will still be in your skin, the Gambella sands still red under your toenails.

The arches of the Galerie des Glaces will leave you breathless. A vision inimical of the African landscape. You will note the marble pilasters, the gleaming fleur-de-lys, and the capitals, gilded and bright, depicting France as the very order of elegance–of court formality. Everything in the hall will shimmer. All around you, women from Austria and Belarus will tour the gallery with sparks in their eyes and heels under their soles. You will look to the Le roi gouverne par lui-même, its painted sky and delicate figures as beautifully superfluous as overripe fruit. And then it will settle on you. Somehow, the guerdians will remind you of the Gambellan children off to school. The elaborate ceilings above you will juxtapose a memory of wanza trees canopied above your head. You will see Africa in France. This is what the road will reveal. How near opulence lies to humility; the finest of lines, as a horizon separates sky and earth. You will see, at the extremes of the human condition, that everything is everything. As daylight through window makes gold the famed hall, so the red african sand blushes all its lands in bronze. Different, but the same. This is the language the road will teach you. The same language that makes you whole will unify a fractured world. You will see. In all beauty there is toil, all order is raised from chaos, all hands offer grace and ferocity equally. Everything is everything. The road will remind you that to truly understand your brothers near and far you must know them. You must walk their streets, eat their food, kiss their heads, and find stillness in their quiet and your own. See, the road is not a road at all. It never was. It is the stitching that binds us all. Get on that road. 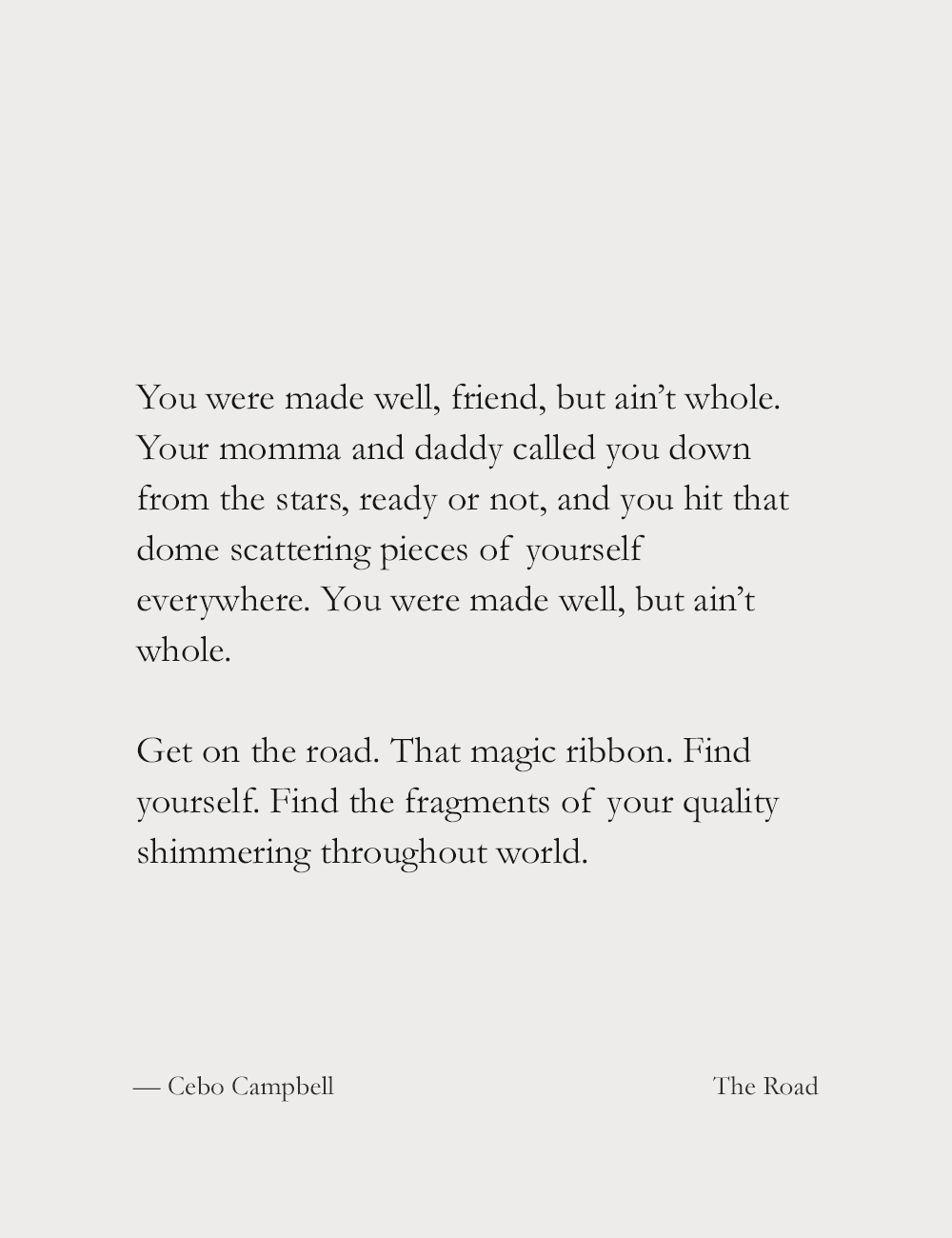 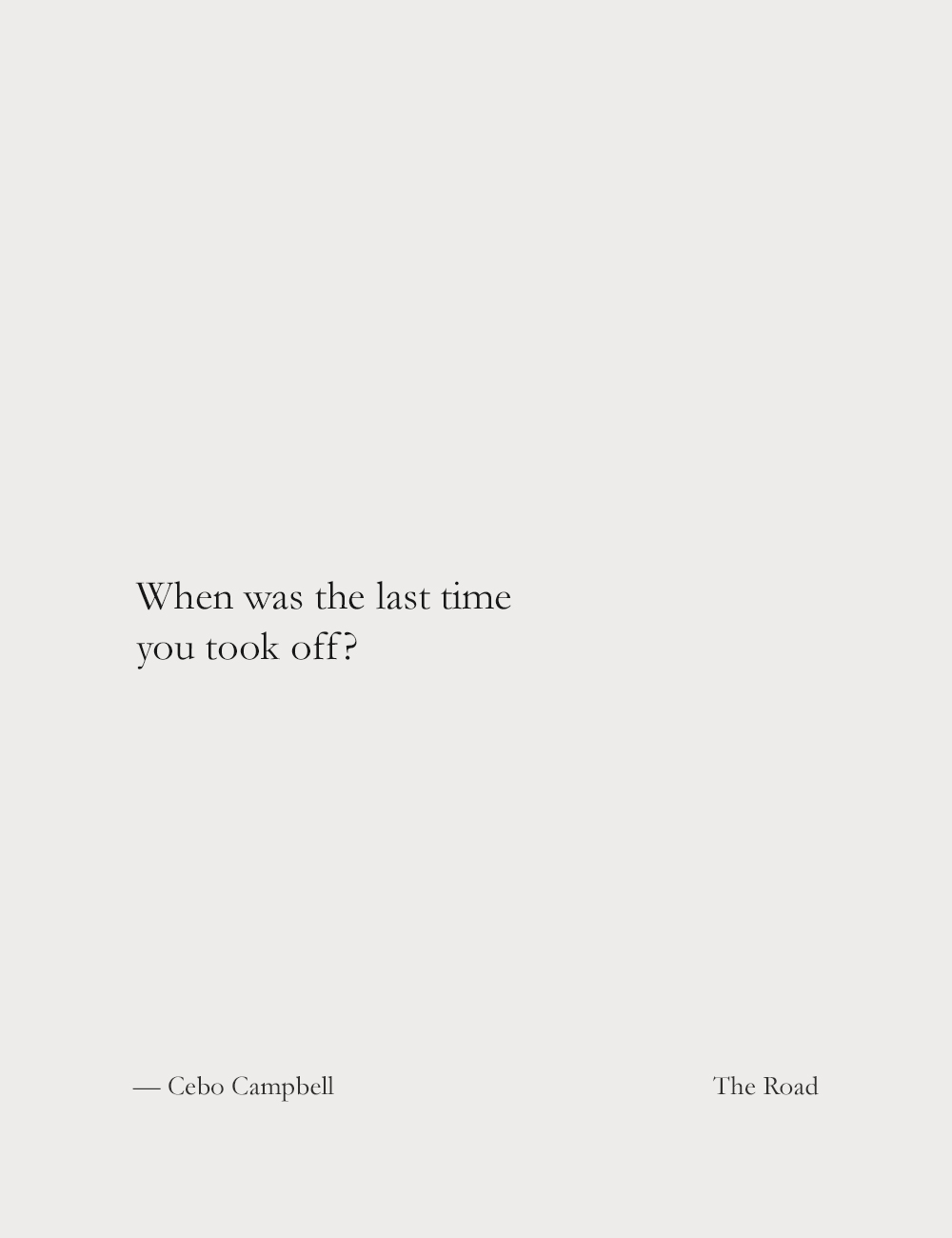 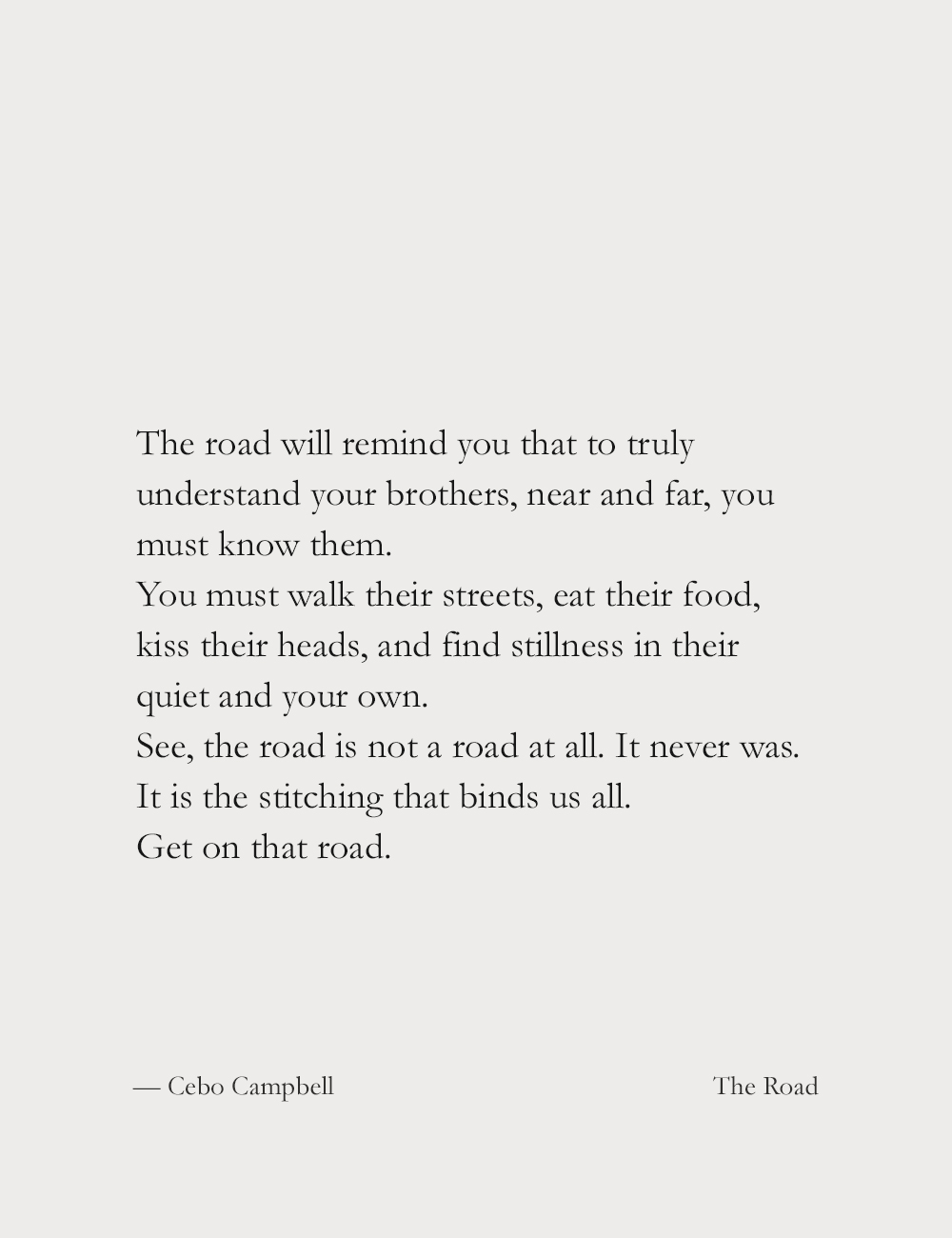 This site uses Akismet to reduce spam. Learn how your comment data is processed.

A WordPress Theme For Storytellers

I am an author and a Creative Director.

As a full-time creative (VP of Creative Services at Spherical), I spend most days writing in the nooks and crannies of my available time. I wake up at 5:30am just to get in a few hours putting words on paper. I write on the train. I write on planes. I write waiting in lines. I feel I have to write. The reason is simple: representation.

I often tell the story of Ferris Bueller; a kid who decides to skip school and, on charm alone, steals a car, impersonates a cop, drinks underage, tampers with computers, and at every step exposes his best friends to peril, only to go home and fall asleep with his mother to kiss him into sweet dreams. I asked myself if Ferris were Trayvon Martin, how might that story end? I know the answer. So do you. And this is why representation is so important. I aim to contribute more stories into the world that diversely feature regular (but beautiful) lives made extraordinary. Art, I believe, is the only way to accomplish this. All my creative work is inspired by and aims to add to all the great work in the world.